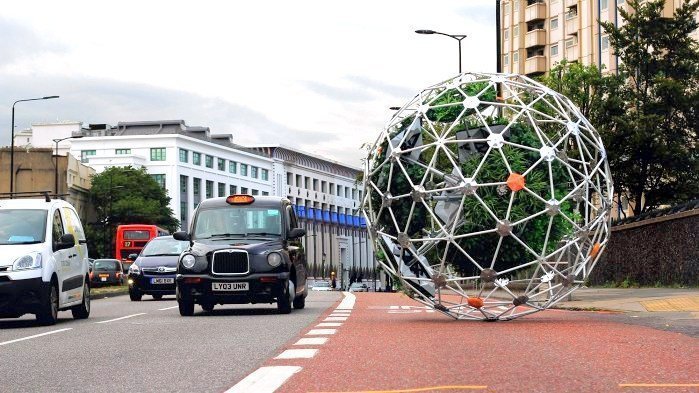 Wouldn’t it be wonderful if plants could get more active and take charge of the delicate balance of nature that has allowed all living things to exist on our planet? Can’t afford to leave all that to us humans, can we?

Hortum machina, B is an innovation that liberates plants from over 510 million years of stagnation enabling them to move about and navigate to more suitable environments. Watch this cybernetic lifeform roaming around in London breaking stereotypes 🙂

Two researchers at the Interactive Architecture Lab in London have come up with a geodesic self-driving sphere that navigates based on the changing needs of the plants inside.

Each plant has sensors which read and translate its electrophysiological signals into directions. In essence, these sensors provide plants a way to walk just like their animal relatives.

Inside the geodesic sphere there is no Intel processor but 12 plant beds with each plant talking to the quasi-central nervous system of the sphere, called Hortum Machina, B. Each plant bed has a limb, a linear actuator, that can extend and retract.

If, for instance, a plant is lying at the bottom of the sphere and, after a while, it’s a bit bored maybe because it wants more light, its sensors will pick up on its electrophysiological signals, and extend a limb or two on the opposite side within the sphere – making the sphere roll and exposing the plant to much needed light.

“The proposal thus sees itself,” the researchers write, “as an extension to a park, a vessel with native plants situated inside a geodesic sphere that travels through unknown land: the urban London. The exoskeleton (geodesic sphere) is driven consequent to electrophysiological data as the plants are imagined to be the intelligence of the structure, with the purpose of reprocreating themselves.”

Who knows what this may lead to? We may be looking at plants being recognised as citizens, plants being the next Mayoral election candidates, or even a plant democracy. Directory of London would very much like that to happen and so we hereby pledge our vote and support to citizen plants for a greener London.

Fraz Wahlah is a leading international lawyer from London.